Blender and Soap Swirls, of course! I love photographing soap swirls and using them in Photoshop over my Blender renders.

This was early in my Blender exploration, having not used 3d before, so I was mesmerized by how I could set up "Golden Hour" lights. What took me so long to try 3d?! :)

More experimenting with light and shadows over reflective vs rough materials. So much fun!

But here is the truest benefit to using 3d. . . changing the POV to Slug's Eye (what we called it in wet Seattle) or. . .

Bird's Eye! So much fun running the camera around through 3d shapes, like a giddy preschool kid!

The shapes I used to create the above water lily pads had wonderful gondola observation stations below. Someday I will revisit and add in the organic sea creature style ships I have been creating. . .

Revisiting using Eevee. The render is instant but the lights are not nearly as rich. But a few tweaks, plus using both cycles and eevee for the same POV, then stacked in Photoshop could be interesting. . .

Early in my exploration of Blender in 2018 I managed to torture some shapes with modifiers into a floating "Lily Pad" conglomerate. I thoroughly enjoyed the process of learning how to change the properties of materials and watching the changes in light interplay. It was at this point I realized I could set the portview path tracing samples up higher than 32, and was able to remove that nasty noise by letting it sit for awhile longer. I only use screenshots to move into Photoshop because I can stack various portviews from studio, to matcap, to lookdev, and without any change of POV use the path tracing sample to top it off. This only works for a workflow directly into Photoshop of course but is perfect for single illustrations, my focus. So much to learn still! 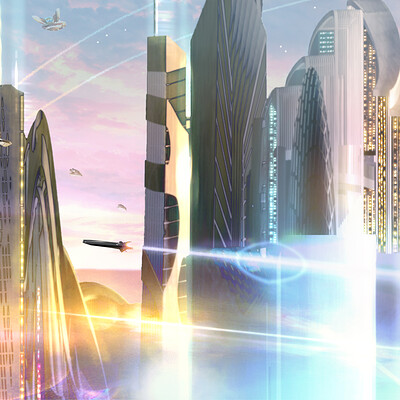